Started at the early age of 15 and been going sideways since.

Born in Lebanon in a household full of car enthusiasts, it wasn’t long before Carlos started driving and drifting in his early teens.

He started training and drifting on closed tracks using a stock 350z, and shortly after started competing and driving professionally, winning the first event he ever competed in, in 2014. Carlos has since competed in many competitions, including the Redbull Carpark drift, the Lebanese Drifting Championship and many others, and still continues to drift and compete after his move to Orlando Florida.

George Kiriakopoulos is a talented Greek licensed Formula Drift Pro 2 Driver going now onto his 2nd Formula Drift Pro 2 season for 2018. He originally comes from Chicago but now is based in Las Vegas, Nevada where he owns, runs and operates his own personal professional shop named Modified Performance.

He is a talented and experienced mechanic/ technician with over 6 plus years of building custom competition chassis’s of all variety setups and expertise. George started drifting since 2014 in which he first began competing in Vegas Drift (Southwest Drift) series in 2015-2016 and then shortly received his Formula Drift Pro 2 license to enter the 2017 season series. He has created from ground up, the name Modified Performance, as his own solid driver name brand building and masterminding all of his own competition race cars each season with the assistance of team sponsors.

Currently George’s racing chassis for the 2018 season is a unique 2013 Rocket Bunny Nissan 370z with a turbo charged 2JZ VVTI motor. It is a one of kind as it is one of the only combo in North America chassis / motor setup currently competing professionally in the motorsport market. George run’s his own privateer driving program with fully sponsored video/ media coverage by WisDM Productions company for whole 2018 on/off racing season including Formula Drift, Grid Life, SEMA, Winter Jam, Street Driven Tour and many other events.

Alec got his start in drifting in 2013. After 3 years of grassroots events, he decided to take on the Midwest Drift Union pro-am championship in a 1986 Nissan D21 truck.

Ultimately winning the series and taking Rookie of the Year in 2016. In 2017 he switched to the 350z chassis. Built completely by Alec and his team from a bare chassis. Sporting stock bumpers and a Crown Carbon Crafting widebody. Under the hood is a Magnuson supercharged LS engine putting out around 1000 HP. controlled by Holley HP EFI. Wisefab suspension and fortune auto pro 2 way coilovers handle the suspension. To handle the power and make adjustments easy the aluminum subframe has been modified to hold a quick change rear end. Running factory Brembo calipers along with chase bays handbrake and booster delete kit. The interior is completed with Prisma carbon fiber race seats and NRG harnesses, quick release, and steering wheel.

If you happen to catch yourself at a Formula Drift event this summer be sure to swing by his pit and show him a photo of your Z and grab a Zociety sticker! 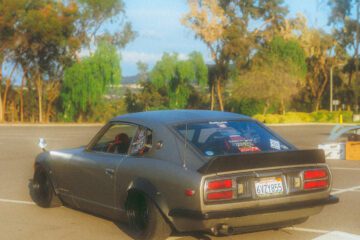 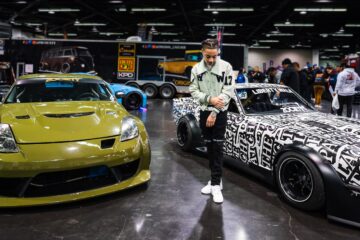 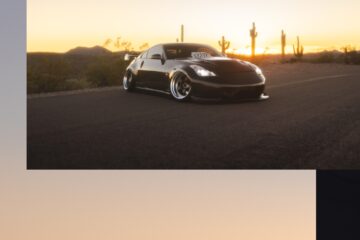